Some chemicals are not only corrosive but also toxic. Hydrofluoric acid is such an example because it contains fluoride ions which can cause great harm if allowed to penetrate into the body where they react with the body’s own calcium. Hexafluorine is a unique First Aid rinsing solution, specially designed for use against Hydrofluoric acid or its derivatives.

What is Hydrofluoric acid?

Hydrofluoric acid is used today in sectors including among others the electronics, steel and glass industries where its corrosive ability comes in handy. It is one of few acids with the ability to corrode glass. It makes our sinks shiny and nice, removes oxide from welding, and also gives us beautiful frosted glass bottles. But it is also a very dangerous acid which can cause severe injury if we are exposed to it without the necessary protection.

Hydrofluoric acid (chemical name HF) is both highly corrosive and toxic. Apart from severe burns it may also cause damage to vital internal organs (heart, liver, kidneys), which can lead to life-threatening conditions.

Hydrofluoric acid is made up of the corrosive hydrogen ion (H+) and the toxic fluoride ion (F–), thereby acting in two ways (see picture below). The acid corrodes the protective skin layer and thus allows the toxic fluoride ion to more easily penetrate the body. Once in the body the fluoride ions bind themselves among others to calcium, and thus disturb the function of the vital organs.

NOTE: Hydrofluoric acid is always dangerous, regardless of its concentration!

In case of exposure, the tissue is always attacked but sometimes with a delayed effect. At high concentrations you feel an immediate burning sensation in the tissues and the burn quickly becomes visible in the form of redness and possibly white greenish spots. However, at lower concentrations, the pain and skin redness may be delayed up to 24 hours after contact, making the damage difficult to identify and treat in time.

How does Hexafluorine ® act against Hydrofluoric acid? 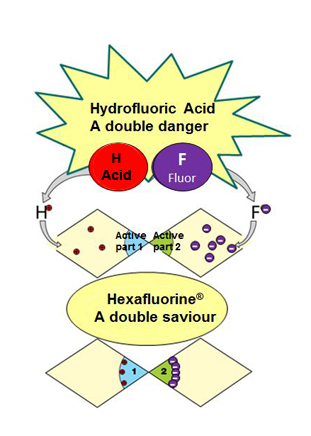 Hexafluorine ® is effective against all acids but also has the ability to neutralise the toxic Fluoride ions which can cause great harm if allowed to penetrate into the body where they bind the calcium.

Like Diphoterine ®, Hexafluorine ® also has polyvalent properties making it safe to use on all chemicals and Hypertonic properties preventing the penetration of the harmful chemical by “drawing out” the chemical from the tissue. However, note that Hexafluorine ® has only a limited effect on basic chemicals.

Why not just water and Calcium Gluconate Gel?

Historically, hydrofluoric acid injuries were treated with water followed by the application of Calcium gluconate gel. The water was used to mechanically wash away the chemical, and Calcium gluconate gel in order to counteract the negative effects of the fluoride ions which have penetrated into the tissue.

Water, however, has a very limited ability to influence the acid’s pH. Therefore you need large quantities (volume) of water to have an effect, and thus a long treatment time. In the meantime, an injury can occur. Since water also does not have any effect against the fluoride ions the subsequent treatment with calcium gluconate gel must be carried out immediately to try to treat the existing injury.

NOTE! The Calcium gluconate gel must not be used in the eyes..

By using Hexafluorine ® we can prevent an injury from occurring at all, and we can effectively treat the entire body including the eyes, oral cavity and ear canals. If you are unsure whether the First Aid care has been exhaustive, or in cases when the start of the washing has been delayed, the application of an antidote in the form of calcium gluconate may however be appropriate as the next step. Always consult a doctor after an injury.

Hexafluorine ® is used by industries, government agencies, hospitals and emergency services throughout the world today. It is an approved replacement to the emergency eye washes and body showers according to the European EN15154-3/4 standard and its benefits are scientifically and practically specified in the Swedish Work Environment Authority’s Report 2010: 6

Hexafluorine ® can be used all over the body; on the skin, in the eyes, in the oral cavity and in the ear canals

Our webshop is currently only available in Swedish